“The spark that led to the Revolutionary War”

The Pine Tree Riot happened on April 14, 1772 in the town of Weare, N.H. on the site where the Quimby Inn once stood.

In the early 1700s more and more people were leaving England and coming to the American Colonies for a new life and hoping for less control from King George III. Forestry was an important industry in the new colonies and continues to be in New Hampshire today.

As early settlements grew and moved from the coast inland, the plentiful and valuable resource, our trees, became more important for landowners.

In the late 1600s England realized they had over cut their own forest to the point they were unable to provide the large trees to serve as masts for the wooden sailing ships of King George III’s Royal Navy. So the King claimed all the White Pine trees in the new colonies that were over 24 inches in diameter now belonged to the King of England and were to be cut and shipped back to England for his Royal Navy as they made a superior masts for his ships. But in 1722 the British Parliament and the King passed a law to reduce the size of the White Pine trees they would call their own from 24 inches to 12 inches in diameter to be sure they had a continuous supply of White Pine masts for future Royal Navy ships.

To understand what a loss of value this was to all who owned forestland, to sawmills and everyone dependent on the valuable White Pine lumber, is to understand the following: A 16-foot-long log, with a 24” diameter produces a total of 425 board feet of lumber. A 12” diameter white pine 16-foot-long log would produce only 95 board feet of lumber. (One board foot of lumber is 1 inch thick by 1 foot long, by 1 foot wide.) If that wasn’t enough to get folks worked up, the King had his surveyors go out and mark all pine trees 12“ and up that they wanted to save for the Royal Navy. The settlers were notified that if they wanted the pine trees left, they first had to pay for a royal license to cut any of the remaining pine trees on their land.

When Benning Wentworth was colonial governor of New Hampshire he did very little to enforce the King’s pine tree laws. But in 1766 John Wentworth (Benning’s nephew) became governor and began to enforce the King’s pine tree laws by sending out surveyors to check the sawmills in Goffstown and Weare and measure the diameter of white pine logs. They found pine logs from 15” to 36” in diameter and claimed they were the King's property. The mill owners were fined and were ordered to pay them by February 7, 1772.

The sawmill owners of Goffstown paid their fines to get the logs back, but the sawmill owners in Weare did not. On April 13, Sheriff Whiting and Deputy Quigly rode into South Weare with a warrant to arrest sawmill owner Ebenezer Mudgett, who was the leader of the Weare mill owners. By the time they found Mudgett it was dark, and Mudgett agreed to meet the sheriff and deputy the following morning. They were staying at the Quimby Inn.

Mudgett and others planned through the night how they would respond to the King's representatives. They met the sheriff and deputy in the morning and decided enough was enough of the King taking more and more. They would take a stand; they did not pay the fine and ran both royal officials out of Weare.

Early in the morning Mudgett and others surprised Sheriff Whiting and Deputy Quigly in their rooms, pulled them out of bed, whipped them, and took them outside where their horses were waiting with their manes and tails sheared off. Both were forced onto their horses and run out of the town of Weare.

Sheriff Whiting didn’t give up and later in the spring he captured one of rioters. The others involved agreed to pay the bail and appear in court. That September eight men from Weare appeared in Superior Court in Amherst and the judge fined each man 20 shillings, which was a very light punishment for their crimes. The judge and many other residents of New Hampshire thought the pine tree laws were oppressive and unfair.

Ebenezer Mudgett and other loggers and sawmill Owners stood up and rebelled against the King’s “Pine Tree Laws” which encouraged others to stand up and push back. This became the spark that one year later fueled the Tea Party in 1773 and then the Revolutionary War against Great Britain in 1775, also know as the American War of Independence, which started in Weare by a few proud, hard working folks like Ebenezer Mudgett and others who decided to rebel against the King’s outrageous laws. 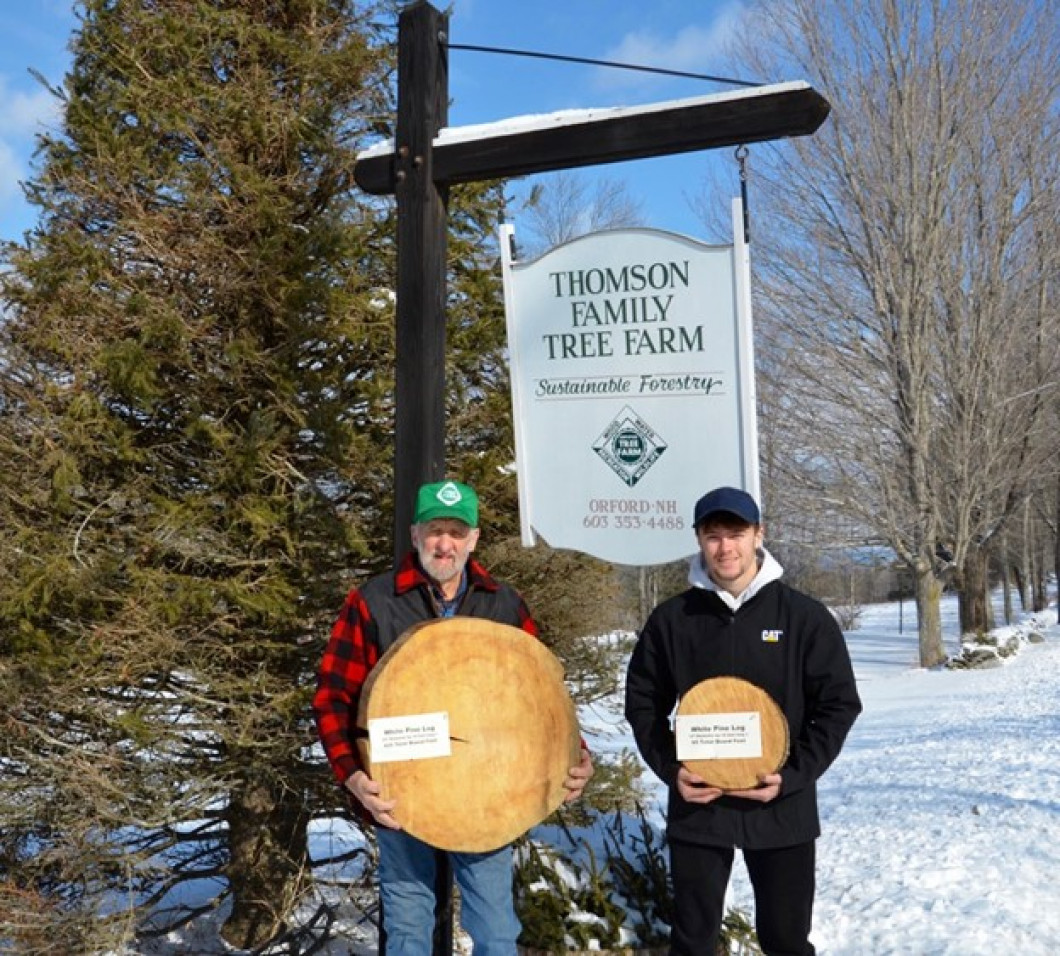 L to R - Tom Thomson owner of the Thomson Family Tree Farm with grandson Jaden Thomson. Tom is holding a 24" diameter cross section of a White Pine Tree which in 1690 the King claimed were Mast Trees for his Royal Navy, then in 1722 a law was passed which claimed any White Pine Tree 12" diameter (which Jaden is holding) and up became the King's for further Mast Trees for the Royal Navy. Note a 24" pine log, 16 feet long would produce 425 board feet of lumber and a 12" pine log, 16 feet long would only produce 95 board feet of lumber, a huge taking by the King, which led to the Revolutionary War