For additional news check out the NHTOA Facebook page

Valley News reporter John Lippman authored an excellent story about the devastating impact on Springfield Power, one of six independent biomass energy plants in New Hampshire, of Gov. Sununu's vetoes of Senate bills 365 and 446. The story was published in the Saturday, August 4, 2018, edition of the Valley News, and it can be read here.

The New Hampshire legislature will meet on Sept. 13 to consider overturning Sununu's misguided vetoes, which, if not overturned, will have a ruinous effect on the state's timber industry as well as on hundreds of jobs, hundreds of millions of dollars of economic contribution to the state's economy, and the health of New Hampshire's forests.

The New Hampshire legislature has set Sept. 13, 2018, as the date when votes will be taken on whether Gov. Sununu's vetoes on certain pieces of legislation passed by the N.H. House and Senate should be overturned. Among the legislation to be considered are the two biomass bills that are crucial to the economic stability of New Hampshire's forest products industry, Senate bills 365 and 446. The governor's veto on each of these bills, both of which passed with overwhelming bipartisan support, was ill-informed, misguided, and ignorant of the basic economic facts of New Hampshire's large forest-products industry.
Leading up to the Sept. 13 vote, the NHTOA will host several rallies at biomass energy plants around the state. You are invited to attend any of these rallies -- note that media may be present at some or all of the events. The rallies include:

A Tree Grows in Rumney 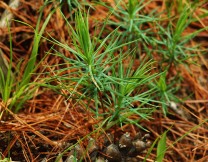 Last November, Timberwolf Logging of Littleton, N.H., logged a parcel in Rumney, N.H., owned by the French Family Exempt Trust. The sale was a seed tree cut, which was accomplished with whole-tree harvesting, to encourage fresh new growth of White Pine, and the logging was timed to take advantage of last year's bountiful seed crop.

Prior to the harvest, site preparation involved removing Beech and some other species in the understory with a feller-buncher. Some 100-year-old White Pines were cut as well. But dozens of strong adult seed Pines were left behind to produce the next generation. Following the cut, Chris Crowe of Timberwolf returned to the site to scratch the soil with a bulldozer to improve the ground for new White Pine growth.

Now, nine months later, the first tiny White Pine trees are beginning to sprout on the ground. In time, a new Pine forest will become established here, supporting wildlife and the local economy.

Robert Berti of FORECO, one of the foresters on this sale, makes a critical point. "This timber sale would not have happened without the market for woodchips that our independent biomass energy plants support," he states. Sustainable forest management, new wildlife habitat, as well as hundreds of jobs and hundreds of millions of dollars of economic contribution depend on the woodchip market.  Yet Gov. Chris Sununu vetoed two bills, Senate bills 365 and 446, that support biomass energy. Both bills passed both houses of the New Hampshire legislature with overwhelming bipartisan majorities.

On Sept. 13, both the N.H. House and Senate will convene to consider Sununu's vetoes. Overturning the misinformed and irresponsible vetoes of Senate bills 365 and 446 will guarantee further such timber sales as the one in Rumney and will improve the health of our forests for wildlife and recreation.

Huge Turnout for July 12 Meeting to Discuss Moving Forward from Vetoes of SB 365, 446 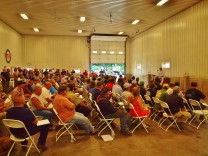 More than 200 people filled the big garage at Michael Sharp Enterprises yesterday evening, July 12, to learn what they can do to encourage their representatives and senators to vote to overturn Gov. Sununu's misguided vetoes of Senate bills 365 and 446. These bills passed the N.H. Senate and House with overwhelming bipartisan support. They are crucial to keeping the market for biomass woodchips viable for New Hampshire's forest products industry and timberland owners and for supporting wood processors looking to self-generate their own power. The six biomass plants negatively affected by the veto support $254 million of annual economic activity state-wide.  A vote by both the Senate and House to overturn the vetoes will take place in September.

Speakers at the July 12 meeting included:

"I've done what I can in the Senate," Sen. Guida told the standing-room-only crowd. "We sent a letter to the Governor urging him to sign 365 and 446 with 16 signatures from senators -- that's two-thirds, enough to overturn his veto. Now it's your fight to take to the House."

Tom Thomson, who has known the Sununu family for decades, said, "What was he thinking when he vetoed these bills?  He was very ill-advised."

Jasen Stock emphasized three figures: two-thirds, 40%, and $1.4 billion. Two-thirds of New Hampshire's standing timber is low-grade, he pointed out, suitable only for firewood, wood pulp, or woodchips for biomass. More than 40% of all the timber harvested in New Hampshire annually is chipped -- the loss of the biomass market for those chips would cripple the industry. And the size of the industry, in total, is $1.4 billion. Its disappearance would devastate the New Hampshire economy. The Governor made a significant mistake vetoing SB 365 and 446.

Plans are underway for press events and other activities to encourage members of the House and Senate to overturn the vetoes. Updates on those plans will be sent regularly over the next several weeks in the Forest Fax. Also check the NHTOA website for regular updates and articles. In the meantime, call the NHTOA office to obtain a petition sheet for gathering signatures to encourage representatives and senators to vote to override the vetoes.